Being a Student of Myself

In the NPCA Certificate in Professional Coaching, one of the qualities of good coach is described as, "Being a student of yourself."

I recently had the pleasure of meeting with two friends, each of whom had their two-year-old child with them. Not being a parent (yet), it's seldom that I'm in that kind of environment.

As the conversation progressed we were often interrupted by the goings-on with, and between, the two children. My attention was drawn to one of the children who began to pile his toys up beside his father in order to prevent the other child from continuing to steal them from him. His anger and frustration at his inability to control the situation was clear to see.

This morning I found myself reflecting on this situation and on how it plays out in our adult world. Now I'm an adult and I've clearly outgrown this kind of behaviour. Or have I?

How much am I like that protectionist child? More than I care to admit. I may have learnt to control my visible behaviour to not to pile up my toys so that others can't touch them, but what about the hidden, internal part of me? What happens when I perceive a possible approaching lack? Have I developed wisdom to effectively steward not only the external world of my actions but also the internal world of my thoughts and feelings? This is where the learning space is.

I read some ancient wisdom this morning that says, "Do not fret. That only leads to trouble." I pondered what it means to fret. Fretting can be described as repeated and intense consideration for a future potentially harmful situation. In this way fretting is a kind of thought. I also considered the question, "How does one not fret?" For this I returned to some of the core knowledge from within the coaching academy.

In the North Point Meta-model (NPM), our thoughts are acts of attention on a belief. From thoughts, feelings then flow. Feelings open the door to our actions from which there is an impact - on ourselves and others. 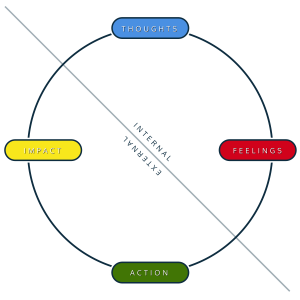 So if fretting is an act of thought and thoughts are acts of attention on a belief, then the belief I am attending to is leading to fretting. How do I cease from fretting? I attend to a different, more powerful belief. For the child, it could be that his father looks after him even if his toys are stolen. And for me?

Much of current coaching and leadership practice refers to mindfulness and being present. Robert Frost, the 20th century American poet, said that the way out is through.

So I sit with, and in, my present beliefs, attend to them and notice the thoughts, the feeling, the actions and the impacts that results from them. This act of noticing is a form of attention and so is in itself a new thought. And so with new thought comes new feeling, new action and new impact. It's in the noticing that I become a better student of myself and that I can open myself up to transformation.

How about you? Are you practicing being a student of yourself?

Strength on the journey,

What does this do? New paragraph.